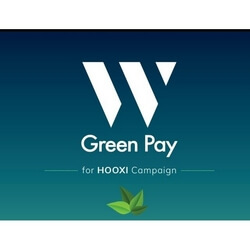 The HOOXI campaign aims to create a platform that enables the public to participate in market-driven GHG reduction schemes in their daily lives. Through the HOOXI mobile application, the campaign will monitor and reward the efforts of individuals participating in GHG reduction activities. The application will distribute WGP tokens as reward to users completing predefined GHG reduction missions, many of which will be customized for the user by an AI engine.

The primary goal of this partnership is to create a large-scale liquidity network for WGP token holders in the WGP ecosystem. WGP token holders will be able to use WGP to make everyday purchases of real products and services in a matter of a few quick taps. Through the Zeex network, WGP token holders can look forward to spending WGP on a wide range of global brands and retailers, such as Amazon, iTunes, Google Play Store and so on.

Guy Melamed, CEO and Co-Founder of Zeex, said: “At Zeex, we look for creative solutions and innovative partnerships that will help us drive greater market acceptance of cryptocurrency. Together with W Green Pay, we believe we can influence the public to adopt the usage of cryptocurrency through a meaningful and impactful way.”

Going forward, WGP will be integrating Zeex’s blockchain payment platform onto the HOOXI Mall — an inhouse e-commerce platform that allows WGP token holders to spend their WGP on discounted products and services offered by corporate sponsors of W-Foundation and the HOOXI campaign.

“Through this partnership, we hope to leverage on the strengths of both organizations to drive mass market adoption of the HOOXI mobile application, and provide the best user interface possible for WGP token holders. We believe this collaboration with Zeex will bring about new opportunities for WGP in the cryptocurrency space,” added Youree Lee, CEO and Co-Founder of W-Foundation.